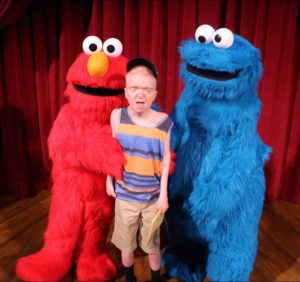 A central Iowa family is home after spending a several days having a wish fulfilled for a youngster who loves the Muppets.

Sixteen-year-old Hunter Moss of Webster City is autistic and has a genetic disorder.  It was his dream to visit Sesame Place near Philadelphia, Pennsylvania, a dream that came true thanks to the Make A Wish Foundation. Kristin Moss, Hunter’s mom, says it was an amazing trip.

“He got to meet just about all of the characters of Sesame Street,” Moss says. “We had a Bert and Ernie’s Hawaiian lunch, a private lunch party. We had a meet-and-greet with Elmo and Cookie Monster before the live musical.” While seeing the beloved fuzzy Muppets up close was the main focus of the trip, but they got to see and do much more, too.

“We went to Sesame Street two days,” Moss says. “We went to the Philadelphia Zoo and spent a full day there. We did the land and water Duck Ride Tour. We did a horse and carriage tour through downtown Philadelphia. We tried new foods and did some sightseeing.” She says her son really loved the trip.

“Non-stop smiles from the time we boarded until the time we got off the plane to come home, non-stop smiles,” Moss says. “He laughed until he cried, literally.” Make A Wish Iowa is expected to grant 192 wishes this year for Iowa children who are facing life-threatening illnesses.

The children are selected to have a chance to travel to places like Disney World or Disneyland or meet up with a movie star or athlete. Learn more at: www.iowa.wish.org