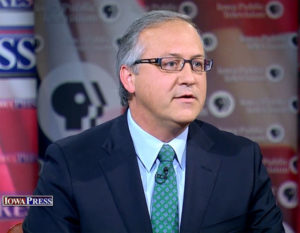 Republican Congressman David Young is the co-sponsor of legislation that calls for putting the likeness of legendary abolitionist Harriet Tubman on the $20 bill.

“Harriet Tubman is a great person to exemplify as a hero,” Young says.

The Obama Administration announced this spring that Tubman would replace President Andrew Jackson on the front of the 20, but Young’s fellow Republican, Congressman Steve King, has called the move “racist and sexist.” Young says he hasn’t talked to King about the issue.

Young is seeking a second term in the U.S. House this November. He will not be attending the Republican National Convention later this month in Cleveland and Young has not explicitly endorsed Donald Trump. Young says he’ll support whomever is chosen as the G-O-P presidential nominee.

And Young is already distancing himself from two Trump policy proposals. Trump has called for banning Muslims from coming to the U.S. if they are coming from terrorist hot spots. Young says America was founded by people seeking religious freedom and he opposes a blanket “religious test” for immigrants.

“But I do think we need to take this seriously and realize where some of these people are coming from in the Middle East and have more, stricter scrutiny when we do background checks on them,” Young says. “…We’ve always been a country and especially a state — right? — that’s been very accepting to refugees, those seeking political asylum, so that can continue, but we have to take this seriously and really scrutinized those who are coming over here.”

Young wants the administrators of three federal agencies to sign a document for every Syrian refugee who enters the U.S., to signify that refugee passed a rigorous security check.

Young also is raising doubts about some of Trump’s declarations on trade. Trump has also vowed to renegotiate the North American Free Trade Agreement if he’s elected president. Young says he doesn’t know if that is even possible.

And Young says both Trump and Hillary Clinton have “demagogued” on the details of the Trans Pacific Partnership. Young isn’t ready, though, to say whether he’ll vote for the TPP when it is considered in congress.

Young wants Trump to select a running mate who is “more solutions-oriented” and not so focused “on rhetoric and name-calling.”

Young didn’t win the GOP Primary two years ago, but wound up getting enough support from Republican delegates at a special convention to be the GOP’s nominee in the third congressional district. Now, some are trying to get delegates at the Republican National Convention in Cleveland to back someone other than Trump. According to Young, the delegates know the rules as currently written favor Trump, because he won the most votes.

“I would assume most of them will probably stick to that rule, but and really, if they have those deep, deep convictions and principles, vote their conscience,” Young said this morning.

A reporter asked: “Is that your advice to them?”

Young replied: “I really don’t have any advice, but do whatever you can to influence the process, to make sure that whoever the nominee is, to hold them accountable to what they say is what they do.”

Young made his comments today during taping of the “Iowa Press” program that airs tonight on Iowa Public Television.