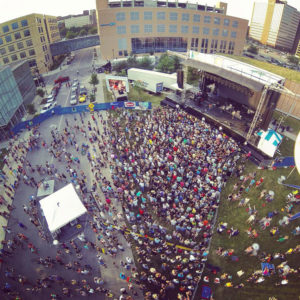 A wide section of downtown Des Moines is being sealed off to vehicles today for the return of a popular summertime concert series.

Named for the two interstates that criss-cross Iowa’s capital city, the 80/35 concert opens at 5 o’clock tonight. Amedeo Ross, the concert’s project manager, says they have more than 40 bands lined up.

“We’re kind of broad indie music, rock, some hip-hop and we have broad jam music,” Rossi says. “We have jam-oriented bluegrass, alt country, just a wide variety in what I’d call contemporary music.”

This is the ninth year for the 80/35 concert in Des Moines’ Western Gateway Park. It features national, regional and local acts performing on four stages and most of the music is free.

“That’s been from the first year,” Rossi says. “We worked with the city of Des Moines to get this off the ground and the Greater Des Moines Community Foundation. We wanted it to be a celebration for everybody, so we have a paid area and three free stages. You can just walk up like the farmers market.”

The forecast calls for sunny skies and highs in the 80s with no chance of rain, so concert organizers are very optimistic about turnout. Rossi says, “We expect about 15,000 people per day, about half of that in the paid area and about half of that just people rummaging through to check things out.”