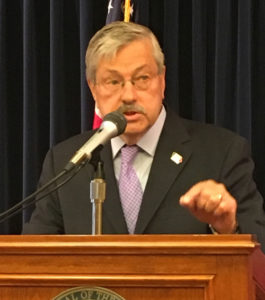 Governor Terry Branstad says his staff has developed a shorter form for felons who are seeking a pardon or want to have their gun rights restored.

“I’ve always taken this responsibility very seriously,” Branstad says. “…It’s one of the extraordinary powers that’s given to the governor and we want to make this process as simple as possible, but we also want to assure the public that we’re going to be very thoughtful and very careful and we’re going to protect the public safety as a paramount consideration.”

The new form, which is available online, is now two pages rather than five pages long. Paroled felons are not be eligible for restoration of their gun rights until they’ve been out of prison for at least five years. Those convicted of attempted murder, armed robbery or some other crime with a gun won’t be eligible.

“Plus, just to double-check we will do a full DCI background investigation,” Branstad says. “…We’ll visit with coworkers and neighbors and anybody else because the safety of the public is really critical and that person has lost their fire arms rights and we want to make sure they’re a very good prospect and they’re not somebody that’s likely to be involved in any kind of violence in the future.”

About 100 people apply each year for a pardon or to have their firearms rights restored. Branstad typically grants 10 or fewer requests and he personally interviews the few applicants who clear all the background checks before making his decision. To get pardoned or get your gun rights back, a person must show they’re current on paying any restitution and show they’ve already paid any fines and court costs associated with their case.

“The point is we have a huge amount of people that are not meeting their obligations, that are not paying their court costs,” Branstad says, “and that really breeds disregard for the law and to the responsibilities of citizenship.”

As of today, nearly $700 million worth of fines and court fees are unpaid in Iowa’s court system. Branstad says 71 percent of that unpaid court debt comes from criminal cases. Branstad used today’s roll-out of the new form for getting a pardon or restoration of gun rights to praise the Iowa Supreme Court for recently upholding the similar system he uses for restore felon’s voting rights.

“We expect people to meet their responsibilities in order to get their rights restored. That’s the balance. Justice is a balance,” Branstad said during his weekly news conference.

Iowa is one of three states that forbid all felons from voting once they’ve completed their sentences — unless they’ve had their right to vote restored by the governor. Former Governor Tom Vilsack issued an executive order granting voting right to felons who’d done their time and former Governor Chet Culver continued the practice. Governor Branstad undid that system in January 2011 when he returned to office.