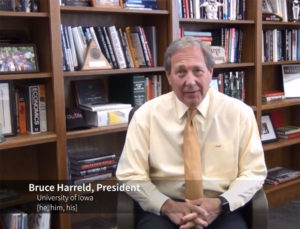 The University of Iowa says it is one of the first public universities in the country to ask students for a list of gender pronouns.

The U-I released a video that starts with various students, professors, staff giving their preferred pronouns. University president Bruce Harreld is one of the people in the video.

“My pronounces are he, him and his,” Harreld says. Jodi Linley, an assistant professor in the College of Education, is also featured in the video.

“At the University of Iowa, we are changing the way we ask for and use students’ names and pronouns of reference. These changes give students the agency to tell us what name and pronouns to use in our communication and interaction with them,” Linley says in the video.

The video says that many students have a name that doesn’t match their legal name, and it features graduate student Shuhui Lin, who says people have trouble pronouncing her first name, so she started going by her last name Lin. The video also says that nearly 59 percent of gender nonconforming students say their gender identity was the cause of verbal harassment on campus.

Linley says the option to list pronoun preferences will be available to all students. “Current students will be able to update their preferred name and gender pronouns in the My U-I system. And new applicants to the university will be able to tell us their preferred name, gender and pronouns alongside their legal name and sex assigned at birth,” Linley says. The video touts the fact that in 2013 the U-I was the first public university to allow students to list transgender on their application form for the Iowa City school.

The video ends with a message from Harreld. “Don’t make assumptions, help us make the University of Iowa as inclusive and affirmative as possible,” Harreld says.