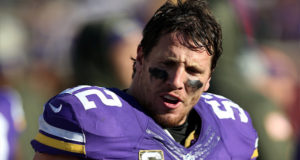 When the Minnesota Vikings open training camp in less than three weeks it will be the final one for former Iowa standout Chad Greenway, who is preparing for his 11th and final season in the National Football League. Greenway has spent his entire career with the Vikings.

“It has been such a great run and I have had such a great time and played for a great organization”, said Greenway. “This is the last chance to win a Super Bowl and my last shot so we are going to throw caution to the wind and try to go win this thing.”

Greenway was the Vikings’ first round pick in 2006 and has twice been selected to the Pro Bowl. He says he is ready for life after football.

“As much as this has been my dream to be in the NFL it is funny how as life moves on you get different responsibilities. I have three kids now and I am looking forward to the next step and the next phase whatever that might be.”

Mike Grimm from Minnesota News Network contributed to this story