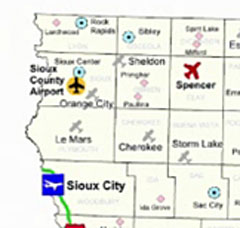 The Transportation Commission approved a grant for a roadway to the proposed Sioux County Airport.

The Iowa Transportation Commission today approved a change in its rules for grants to help pay for roadways to businesses, making it possible to award a grant to the new Sioux County airport.

Department of Transportation spokesman Craig Markley, says the Revitalize Iowa’s Sound Economy or RISE program has given money to fund roadways into industrial parks since its inception in 1985.

The rule change approved by the Transportation Commission allows them to consider the link between a roadway and an airport when awarding the funds, and it was driven by the planning for the Sioux County airport.

“There were local airports in both Sioux Center and Orange City and they worked together to combine those into one larger regional airport,” Markley says. “What that does for business is that regional airport — it’s got a longer runway, its got safety features, it allows them to land larger aircraft at that airport.” He says it also allows larger planes to take off with bigger loads for the businesses in the region.

“It really allows businesses like Diamond Vogel, Interstate Power, to grow their businesses,” Markley explains. RISE grants had been based on an immediate opportunity to build a new business where the road was going, or it could be based on the speculation that adding the road would open the opportunity to lure in new businesses to the facility served by the roadway. Markley says the airport situation is a little different.

“It’s kind of a hybrid if you will — we still provide 50 percent funding — be we also need some justification from local businesses. We need to know how that regional airport is going to help them grow, help them retain their employees. So, we get documentation form them and evaluate it,” according to Markley. The commission approved a $646,000 grant for the airport, which is 50 percent of the project.

“They’re looking at finishing up the design in a month or so and the project will be let for construction,” Markley says. “They’ll be working on that over the next year, year-and-a-half and the airport is expected to open in 2018.” The commission debated the rule change for the last several months with a concern over how it might impact the overall RISE program. Markley doesn’t expect the impact to be major.

“It’s probably going to be pretty limited as far as the eight airports that it will really apply to — because it has to be a regional airport. There’s probably a couple of others in the wings…it could be a year, two years, five years, 10 years down the line,” Markley says. Jerry Searle represented the airport authority at today’s meeting. Searle thanked the Transportation Commission and the DOT staff for working on the project.

The 28 million-dollar airport will be built near the intersection of U.S. Highway 75 and Iowa Highway 10 in Sioux County south of  Sioux Center.