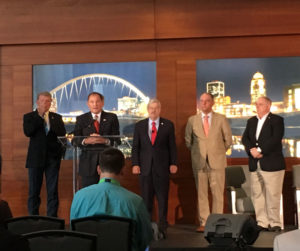 Utah Governor Gary Herbert speaks at a news conference for the National Governors Association meeting. Iowa Governor Terry Branstad is to his left.

More than a dozen governors from around the country have convened in Des Moines this morning for the annual summer meeting of National Governors Association.

“The 108th meeting of the governors — I’ve only been to 21 of them,” Branstad said, getting laughter from his colleagues and the small crowd.

“Gives governors an opportunity to come to Iowa that are not necessarily running for president,” Herbert joked, “and so we have a chance to come and enjoy your hospitality.”

Indiana Governor Mike Pence was scheduled to attend, but he’s  in Manhattan where Donald Trump will introduce him Saturday as his vice presidential running mate.

The governors held a moment of silence as they began their first work session, honoring recent victims of violence in France, Dallas, Minnesota and Louisiana. Minnesota Governor Mark Dayton cancelled his plans to attend the meeting and Nevada’s governor left last night to deal with an emergency in his state.