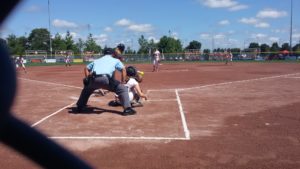 Katie Johnson had a two run triple and also ended the game in the bottom of the fourth inning with a two-run homer as top ranked Akron-Westfield rolled to a 13-1 win over West Harrison in a class 1A quarterfinal.

The Westerners scored seven runs in the first inning and were helped by five West Harrison errors.

“We love to hit the ball hard, score a lot of runs and play small ball”, said Johnson. “It just worked out for us really well, today, so I am excited.”

Second ranked West Des Moines Valley showed why it is considered the favorite in class 5A. The Tigers scored three runs in the opening inning and cruised to a 5-0 win over Cedar Rapids Prairie.

“Our goal was to score early”, said Valley coach Tom Bakey. “We got three runs in the first and put them on the defensive. Our experience really played into this game so I am very, very happy with the way our kids played.”