You are here: Home / Human Interest / Vintage military planes to land in Iowa 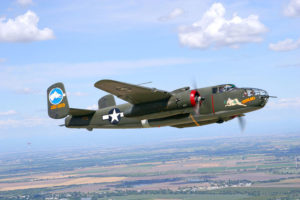 Four fully-restored original warplanes from the World War Two era will be flying over Iowa next week, making one stop in the state for tours and flights.

Michael Dober , volunteer coordinator for the Collings Foundation’s Wings of Freedom Tour, says it’ll be a rare opportunity to see the historic aircraft.

Dober says these aircraft are the “real deal” and appear like they just came off the flight line in the mid-1940s. “They have some bombs in the bomb racks, obviously not live,” he says. “The waist guns, you can pull up a pin and target whatever you want to as you’re flying over.”

Visitors can walk through the aircraft or take a flight, for a fee. Dober says you’ll see how the planes were all business and had few comforts built in for the crews.

The tour will be setting up at the Ankeny airport, just north of Des Moines, on July 25th through the 27th.