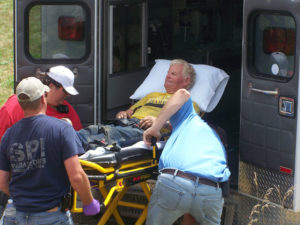 Stewart “Skip” Harris as he was being loaded in the Akron Ambulance after being rescued.

An 82-year- old rural Akron man who got lost in a cornfield Saturday evening was found Sunday afternoon following an extensive search.

Son John Harris says he saw a light on at his father’s house in the evening, so didn’t stop to check on him. Harris says he discovered his father wasn’t home Sunday morning and began looking for him.

“Right away I came down here to the field to see if he happened to be down here — and then that’s when I found the four-wheeler here in the cornfield abandoned. I called my sister and told here ‘we got problems.’ We looked for a while, five family members and finally we just said we can’t do this ourselves and called 911,” Harris. “Somehow the word got out…and there’s just so many people here who have helped us out.”

He says his dad apparently went out to check on an irrigation units. “Evidently in the dark he got disoriented and he drove into the cornfield and couldn’t find his way out. He left the four-wheeler and started walking around. It’s hard enough to find your way out in the daylight, let alone in the dark,” Harris says.

The elder Harris was located in a cornfield at about 2:12 Sunday afternoon, nearly 17 hours since he was last seen. He was in good condition, aside from being exhausted, and dirty and dehydrated.

Volunteer searchers cheered when Skip Harris was brought to the command center ending the search. John Harris was thankful with the way things turned out. “It could have been a tragic ending — fortunately it worked out the right way,” Harris says. “We thank all the volunteers, and thank God for helping us find him.” More than 150 people from various emergency agencies, along with several volunteers concentrated their search within two corn fields Sunday.