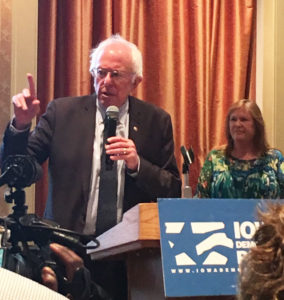 “Iowa was a very, very important state for our campaign. We ended coming close to splitting the delegates (on Caucus night),” Sanders said. “I wouldn’t be surprised if we ended up with a little bit more of the popular vote.”

“You gave us the opportunity to tell the rest of the world that we were a serious campaign. That’s what you did and I thank you all very much for that. See you soon,” Sanders said to conclude.

Sanders spoke for about eight minutes, drawing cheers from his supporters in the room and applause from Hillary Clinton’s backers, too. Sanders acknowledged there are complaints about access to the caucus process, but he defended Iowa’s lead-off caucuses.

“What you have done is say to people: ‘We live in a democratic society and you know what? You’re going to have to get involved,'” Sanders said. “And yes, if it takes an hour or two hours of your life to determine the future of this country, so what? That’s a good two hours.”

“What I think we have got to do is have a progressive agenda which speaks to the needs of working people who are hurting today,” Sanders said. “…What we need to do is think big, develop an agenda that works for the working families of this country and the middle class of this country, have the courage to take on big money.”

Sanders hinted he’ll be converting his campaign “into another type of organization which is going to pay a lot of attention to the people, candidates and getting people involved to run for school board, to run for city council, to run for state legislature. We need to do that all over the country.”

When the roll call is taken tonight at the Democratic National Convention, 20 Iowa delegates will be voting for Sanders and 31 will vote for Clinton.

Sanders spoke with Iowa delegates right after speaking next door to the breakfast meeting of delegates from Wisconsin, Alaska and Montana. Sanders’ followed former Senator Tom Harkin on the stage there.