You are here: Home / Health / Medicine / Legislators hear from both sides on new Medicaid program

The program is a combined operation with the federal and state health care system providing services for the poor and disabled. The leader of the ABCM Corporation, Tim Roberts, talked about the issues with the 30 nursing homes his company operates.

“As of  yesterday we are still owed over $3.3 million for April through June services.  In order to make up this delay in payments we’ve had to increase our borrowings to $3.3  million to make sure we make payroll,” Roberts told senators. 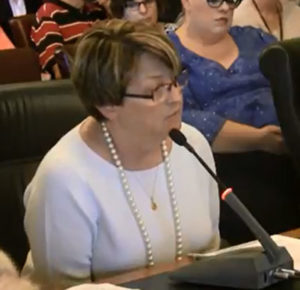 Orchard Place of Des Moines CEO Anne Starr spoke of similar issues. “What’s happened since the transition to the new Medicaid plan, Orchard place is awaiting payment from the MCO’s in the amount of  $978,378.  This is about one third of our Medicaid billing since July first — so just a little shy of one million dollars,” Star says.

Starr says the providers have been helpful, but  the new system has dramatically increased the time it takes to get the claims paid.  “I had a therapist last week in the hallway in our residential program stop me….and say ‘I have spent more time on the phone this week with managed care than I have spent with the kids.’ Not why he gets up in the morning to come to work,” Starr says.

Senator Joe Bolkcom, a Democrat from Iowa City,  made some comments after the providers testified. “This isn’t some little anomaly over here, this little problem that has cropped in this major change. This is a huge problem of the rollout of this,” Bolkcom says. “For months we have said, one it is a bad idea, two we are not ready.  From everything I’ve heard, this  couldn’t be going worse.”

Service providers also testified at the hearing. Amerigroup plan president Cynthia MacDonald says they know there are some problems. “The providers, the members here who are talking, their reality is real to us as well,” MacDonald says. MacDonald says she has worked on other big rollouts before and it is not unusual to have issues as things get going.

“The overall message is that we are building, we are working through the process of implementation. It is a process, it is something that builds along here and it does get better. That is the guarantee, it does get better,” according to MacDonald.

Cheryl Harding is the market president for Iowa Amerihealth. “I would echo my colleague’s comments. We are in the very beginning of the transition of a very significant program change,” Harding says, “and it is always difficult to go through a significant change.” Harding says they understand the concerns about the amount of time it takes.

“We feel as much hardship as about cases or the people who are struggling to find their way through it.  And we certainly reach out and try to help that situation,” Harding says. ”  I would not say that the first three months of this initial transition has   been perfect. But I would also say that there are positive stories along with the negative stories.”

The Medicaid managers say as many as 25 percent of claims are being denied, but they say that’s only slightly more  than under the old system.  They say the private companies are meeting their contractual obligations.

Governor Terry Branstad’s office released what is says are new data that show Iowa’s Medicaid patients have more choice, access, and accountability under Medicaid Modernization than ever before.  The news release says patients have more choice than ever before fitting their individual needs, more access to services including twice as many doctors and nurses, and real accountability that will improve the health of more than 500,000 Iowans.

The release also said “As 39 other states and the District of Columbia have done, Iowa is leveraging its own 30 years of Medicaid managed care experience and utilizing nationally-experienced health plans to coordinate care making Medicaid patients healthier and fitting individual needs.”