You are here: Home / News / Tons of trash pulled from the Des Moines River in Project AWARE 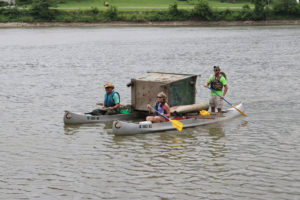 Volunteers with a dumpster pulled from the Des Moines River.

The coordinator of an annual river cleanup event has compiled the results of this year’s effort in southeast Iowa.

“We were able to recycle about 77 percent (of the trash), so a lot of scrap metal, tires, and dirty plastic,” Seigley said.

This was the 14th year for Project AWARE, which stands for A Watershed Awareness River Expedition. Some of the trash pulled from the lower Des Moines River — between Eldon and Farmington — included an old motorcycle, a dumpster, a fiberglass boat, and the frame of a car.

“I would say the most unusual items removed were about 8 to 10 bathtubs,” Seigley said. “When the first few came out, we were surprised to see them and then we found a few more along the way.” The expedition covered 52 miles, July 11-15, through Wapello, Davis, Van Buren and Lee counties. The 329 volunteers included one man who came all the way from Sweden.

“And then we had a number of volunteers from other states that joined us…Illinois, Minnesota, Wisconsin, Missouri, and several others,” Seigley said. A total of 115 volunteers participated all five days of the event.