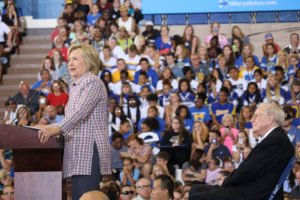 Hillary Clinton campaigned in Omaha late Monday afternoon, vowing to push for an upgrade to the nation’s electrical grid if she’s elected president — to better distribute the power generated by wind turbines.

“I know because I’ve seen them in the crowd. There are a few people from Iowa here today and your neighbor Iowa is already getting one-third of its energy from clean energy, primarily wind energy,” Clinton said.

“They’re also giving farmers extra income for hosting the turbines on their farm and they are taking abandoned factories and actually assembling the wind turbines, putting people to work in Iowa to produce the energy in Iowa,” Clinton said, to cheers.

Clinton is calling for more federal investment in the nation’s aging infrastructure, like electric transmission lines, as well as bridges, roads and water treatment systems. Clinton spoke to a crowd at Omaha North High School late this afternoon, then attended a private fundraiser. It was held at the home of Susie Buffett, the daughter of investment guru Warren Buffet.