You are here: Home / Human Interest / Sundance Institute managing director to be at Iowa Arts Summit 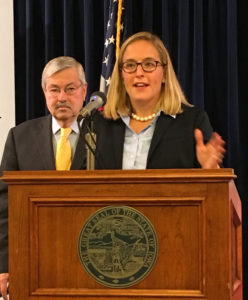 “Two years when we launched the Iowa Arts Summit as a statewide convening for Iowa’s arts community, the response was overwhelming,” Cownie says, “so this year we will build on that success with local, state and national voices converging.”

The day will allow artists and non-profit groups that work on cultural projects throughout the state to network, learn about success stories in other communities and get fundraising tips.  Here’s a link to the program.

“We’re also excited to add a touch of Hollywood to this year’s summit…presenting a session track for Iowa filmmakers featuring Sarah Pearce, the managing director of the Sundance Institute,” Cownie says, “as well as Iowa native and University of Iowa alum Andrew Steele who is the creative director of the website ‘Funny or Die.'”

Steele grew up in Iowa City. He was a writer for “Saturday Night Live” and won an Emmy in 2002.

Dozens of artists will be doing “pop up” exhibits during the Iowa Arts Summit. More than 50 sculptures created by Waterloo’s Youth Art Team will be on display. Cownie says cultural experiences in Iowa cities and communities help keep and attract young professionals.

On Friday, during the summit, Cownie plans to release new data about the impact of the arts on Iowa. Registration is still open for the conference here until Wednesday. Onsite registration is available on Friday as well.