You are here: Home / Crime / Courts / Bakken pipeline protestor says they use nonviolence, not fire 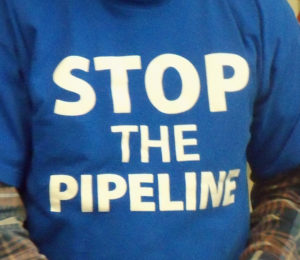 The t-shirt of a Bakken pipeline protestor.

Police are still looking for those responsible in the recent suspected arson fires in Jasper and Mahaska counties that caused nearly one-million dollars in damage to construction equipment being used to build the Bakken oil pipeline.

Iowa Citizens for Community Improvement is against the project, but state policy director Adam Mason says their opposition is peaceful and they don’t approve of setting fires. “Our members who are opposed to the pipeline have always pursued nonviolent methods of trying to stop the pipeline,” Mason says. “We don’t condone violence and obviously don’t condone this kind of activity.”

With the recent permit approval from the U.S. Army Corps of Engineers, Mason says the next step in opposition is to work with landowners in resisting eminent domain proceedings. He says hundreds of Iowans are willing to be arrested to stop the project.

“We have a Pledge of Resistance where nearly 1,000 Iowans have signed up to engage in nonviolent, direct action and potentially blockading construction of the pipeline,” Mason says. “Our hope is that President Obama sees this and steps in, much as he did on Keystone.” He’s referring to the Keystone X-L oil pipeline which had to be halted during the construction phase west of Iowa in Nebraska.

Mason says ICCI will work for more permanent solutions to problems with these types of pipelines. “We still want to see long-term fixes to the situation that allowed this pipeline to come in and be built,” he says. “Being approved by three IUB (Iowa Utilities Board) commissioners and just rubber-stamped by the federal agencies, it’s a sign we need stronger rules and regulations here in Iowa on pipelines. Of course, we want to see more investment in renewable energies that create jobs and bring good clean energy to our communities.”

Dakota Access is building the $3.8 billion pipeline from the Bakken oil fields in North Dakota through South Dakota and 18 counties in Iowa, ending up in Illinois.