You are here: Home / Education / Reading success improves, but Board of Education still concerned 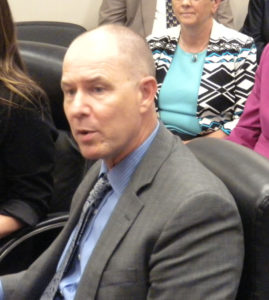 There is some progress in improving the reading levels of students in kindergarten through third grade in the state, but members of the State Board of Education expressed concern today about whether it is enough.

The director of the Department of Education’s Division of Learning and Results, David Tilly, talked the board about the progress of the efforts to improve reading levels beginning last fall.

“Only 64 percent of the kids met their benchmarks across the K-3 system. That’s alarming, that’s not a very high level,” Tilly says. “We also looked at the exact same statistic in the spring and we see that in our data, about four percent more of our students are hitting that target benchmark.”

The reading issue is part of the state education reform plan and making sure that all students are proficient readers by the end of third grade. Tilly was asked how the improvement stacks up with what he thought it would be. “You would hope to see about a three percent growth — three to four percent growth if it’s real per year– statewide,” Tilly says. Tilly says 65 percent of the districts saw improvement in reading levels, while the other 35 saw declines.

Tilly spoke with Radio Iowa after the meeting and he says some districts did struggle with the new programs designed to help kids improve. “I think a lot of the issues have to do with systems getting geared up, getting organized, looking at their data — figuring out in their systems which parts of the system are working and which parts of the systems need work,” Tilly says. He says there weren’t any noticeable differences between larger and smaller school districts.

Tilly says it is not likely the improvement pace will pick up dramatically. “When you look at state’s that have actually grown and made those growths on their state assessments — three to four percent a year on their proficiency seems to be a sustainable rate. The reality is that it doesn’t turn around overnight,” Tilly. Tilly says there is a lot of good work going on — but it’s not just a matter of sitting down with a child and showing them how to read.

“There’s an article, a professional journal article called ‘Teaching Reading Really is Rocket Science.’ And in some ways it really is, from understanding that there’s a letter sound correspondence between letters, understanding that the letters can be put together and when you put the letters together they make works, understanding the you put words together into sentences, how to sound out words, how to read those words fluently and accurately. There’s so many skills that go into what we see at the end of it — well that’s just reading,”Tilly explains. He says when kids are deficient in any one of those areas it hurts their overall ability to read and they need help in improving.

Tilly says this is the first time the state has had the data to get a good assessment of reading levels. He says 97 percent of the K-3 students in the state are now being assessed.