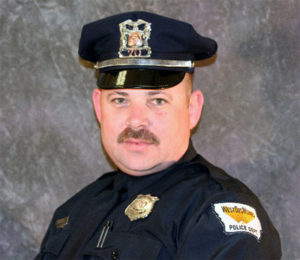 Miller, who was 47, had served in northern Saudi Arabia and Iraq during Operation Desert Storm as a military police officer with the Iowa National Guard. He started his law enforcement career at the prison in Mitchellville before joining the West Des Moines Police Department and serving 26 years.

Monsignor Michael Hess talked about Miller’s service as a soldier and then a police officer. “Shawn was not in it for his own glory, but to better the lives of others,” Hess says. He says he sat down with fellow officers shortly after Miller’s death and they told him several stories about Miller — and then told him he couldn’t share them at the funeral. Hess recalled his own memories of Miller.

Hess says he told officers he never recalled seeing Miller’s name come across his desk for any trouble when he led Dowling High School and Miller was a student. “And the response was, ‘Shawn was very clever,'” Hess says. An emotional West Des Moines Police Chief Shaun Ladue talked about Miller’s dedication to the department and the desire to improve as an officer.

Ladue recalled a conversation with Miller in early 2013 about his plans for leadership and how Miller said he had not completed the educational requirements yet. Ladue asked him what was holding him up. “And he stated this, ‘my family comes first and right now there is far too much for me to do for them before I can focus on myself.’ I remember that very clearly,” Ladue says. He says Miller later began the educational work he needed as was on track to finish it. Ladue says Miller loved training exercises for big events and helping others.

“Shawn had so much influence on those that he worked with and that knew. He always strived to influence others any way possible,” according to Ladue. Miller was scheduled to be promoted to Sergeant at the end of this month, and Ladue says that will still happen.

“Shawn Miller’s lifelong work will be honored and he will be posthumously promoted to the rank of Sergeant on August 29th,” Ladue says. “This will be one of the most proud moments of my career to be able to promote someone so deserving and so long overdue. The truth of the matter is Shawn Miller would one day be running the police department as its chief, had he been here to do so.”

Miller was buried at the Iowa Veterans Cemetery. He is survived by his wife Shannon and three children, Samantha , Shawn Junior and Seth.