You are here: Home / News / Clinton promises her campaign’s organizing in every part of the state (AUDIO) 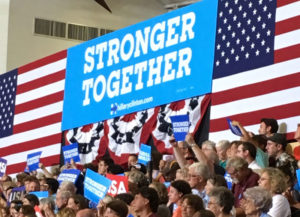 Hillary Clinton says “words have consequences” and she used part of a speech in Des Moines this afternoon to respond to Donald Trump’s comment that “Second Amendment people” would be able to stop Clinton from picking Supreme Court Justices.

“Yesterday we witnessed the latest in a long line of casual comments from Donald Trump that crossed the line,” Clinton said.

Clinton promised the crowd of 1,500 gathered in a Des Moines high school gymnasium that she’ll run an aggressive campaign in Iowa for the General Election.

“We are organizing across Iowa. We’re going to be helping people vote early so they can make sure their vote will count,” Clinton said. “We’re going to be reaching into every part of this state…I want you to imagine what you will feel like after that election If we have not come together to chart a course of confidence and optimism that will really get our economy working for everyone, keep us safe and maintain American leadership around the world and unify our country.” 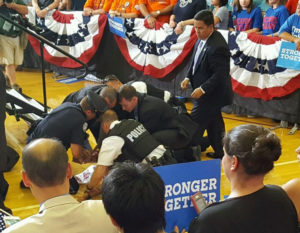 Secret Service members subdue the protestor at the Clinton rally.

An animal rights protester rushed the stage at one point, but was stopped by Secret Service and ushered out.

Clinton was touting her commitment to rebuild the nation’s crumbling roads, bridges, water systems and airports and she kept talking through the brief disturbance.

“Some people get a little carried away. Have you noticed that? But I get carried away thinking of all the jobs we’re going to create,” Clinton said,to cheers.

Clinton was introduced by former Senator Tom Harkin and his wife, Ruth.

“Regardless of what you may have read or heard over the last 20 years from the likes of Newt Gingrich or Rush Limbaugh…and others in that right wing kook corner, Hillary Clinton is one of the most honest, trustworthy, patriotic, caring, competent public servants we have ever known or working with in our entire lifetime,” Harkin said, to cheers.

Ruth Harkin publicly endorsed both of Clinton’s bids for the White House.

“We’re happy to be on the home stretch. No doube this has been and will be a tough campaign, but Hillary, with our help, has the resilience to win,” Harkin said, “and become our first woman president.”

Ninety-nine-year-old John McCaw of Des Moines was in the crowd cheering Clinton on.

McCaw contends Donald Trump would be a “dictator.”

Third district congressional candidate Jim Mowrer was given a chance to speak before Clinton and her entourage arrived. He linked his Republican opponent Donald Young to Trump — and told the crowd Trump does not pass the “commander in chief” test.

“His election would imperil the future of our country and the entire world,” Mowrer said.

Congressman Young skipped last week’s Trump rally in Des Moines. Mowrer, along with U.S. Senate candidate nominee Patty Judge, both spoke at Clinton’s event. Judge touted her ability to work with both political parties “to get important things done” when she was a state senator and the state’s ag secretary.

“This is what Chuck Grassley has seemingly has forgotten and, truthfully, Donald Trump has never learned,” she said.

“Hillary Clinton had an opportunity to share her vision with Iowans today, but instead she showed up an hour late, only spoke for twenty minutes, and didn’t provide any details on her ‘plan’ to get America back to work,” Kaufmann said. “…Her planned tax hikes fall far short of paying for all of her proposed new spending and will increase the national debt by over a trillion dollars while hurting economic growth.”