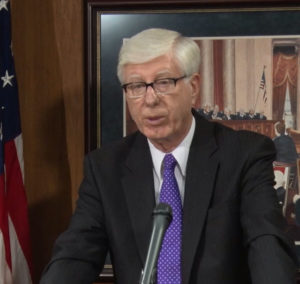 The Connecticut-based Trilegent marketing company has been ordered by a judge to pay $300,000 to the state after violating a previous agreement to comply with state law in selling buying club memberships.

Attorney General Tom Miller says the company will also have to stop calling Iowans and make refunds for breaking the 2013 agreement.

“We thought the settlement took care of it — but they have violated the settlement, violated the consent decree — by signing people up in Iowa without following the requirements of the consent decree,” Millers says. “And then trying to get Iowans to give them a non-Iowa address so that it would appear to be out-of-state.” Miller says the company used a variety of techniques, including sending a check for a free trial offer that included fine print that enrolled them in buying clubs and automatically charged their credit cards for small amounts.

“It’s a very clever set of deceptions to take a relatively small amount of money from people each month — that over time adds up to a tremendous amount of money that’s taken from Iowans,” Miller explains. The settlement was supposed to end any deception, but Miller says they found a telemarketer working on Trilegiant’s behalf attempting to enroll an Iowa resident in the company’s “Great Fun” buying club membership by offering a flight booking discount in exchange for the consumer accepting the free trial membership without the required legal disclosures.

The judge filed the new judgment against the company Thursday in Polk County District Court includes paying back to customers. “They are refunding money to 2,100 Iowa consumers that they improperly got membership buying club money from. And it’s a total of about $171,000,” Miller explains. The Attorney General says the penalty should work as a deterrent for any more violations of the settlement.

“Make sure that you know how much it is going to cost, where the money is going to come out of — usually your credit — whether it is automatic or not. The whole idea is to stop them from sort of the rush and the deception and make sure that you are getting what you want,” Miller says. “Additionally make sure that they are following Iowa law that among other things would send you something in writing that you would sign that you really want to be a part of this deal.”

Also, be sure to examine your credit card bills every month, your checking account and debit card statements, other financial accounts, and phone bills. Watch for unauthorized charges, and dispute them at once, in writing.