You are here: Home / News / Evan McMullin backers working to get candidate’s name on Iowa ballot 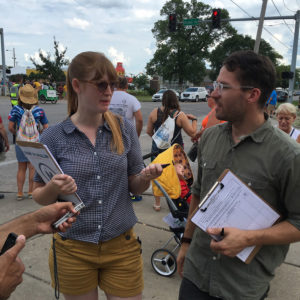 A Des Moines couple with clipboards was across the street from the Iowa State Fair’s Grand Avenue entrance this afternoon, collecting signatures on petitions.

Kate and Dylan Jones are part of a last-minute effort to get independent presidential candidate Evan McMullin’s name on Iowa’s General Election ballot.

“This whole two-party system is actually pretty antiquated, this idea that, ‘Oh, you have to vote for a Democrat or you have to vote for a Republican,'” 33-year-old Kate Jones said during an interview with reporters from Radio Iowa and The Des Moines Register. “We want people to know that you can actually vote for who you believe, that you’re still free in this country to do that, and the next three months, we just want to use our voice as much as we possibly can, because we don’t want to look back and say: ‘I wish I had done more.'”

Evan McMullin is a Utah native, former CIA operative and most-recently the chief policy director for Republicans in the U.S. House of Representatives. McMullin will qualify for the Iowa ballot if his supporters collect the signatures of at least 1,500 registered Iowa voters. The signatures have to come from at least 10 counties and the petitions have to be submitted to the Iowa Secretary of State by this Friday. That’s why the crowd streaming into the State Fair is a prime target, since people come from across the state to attend.

“I’ve been getting flooded by friends who say: ‘Hey, we are interested. We can’t make it to the fair today, but we want to come,'” Kate Jones said.

The couple and others plan to stake out the sidewalks outside the fairgrounds this week until they get the petition signatures they need.

Kate and Dylan Jones attended the Iowa Republican Party’s Caucuses on February 1 and both supported Florida Senator Marco Rubio. The couple said they want to vote “for” someone in November, but neither can vote for Hillary Clinton or Donald Trump.

“We would really like someone who is presidential,” 30-year-old Dylan Jones said. “We’ve been a little disappointed with how the Republican Party really has handled themselves throughout this whole election process, some of the things Donald Trump has said and a lot of the hate-filled rhetoric.”

The Joneses say they want to “vote their conscience” and they’re worried about Trump’s anti-immigrant and anti-Muslim rhetoric.

“We need compassionate leaders and the ability to articulate that refugees are not ISIS. They are people who’ve gone through trauma and don’t have a lot of resources when they come here and we need to be their neighbors and love them,” Jones said, pausing, her voice breaking with emotion.

Her husband jumped in, citing the “unalienable rights” outlined in the second paragraph of the Declaration of Independence as well as the couple’s support for “religious liberty.”

“We are Christians,” Kate Jones said a few minutes later. “…We don’t want to be the only people in this country with rights.”

Dylan Jones, who is a landscape architect, described McMullin as someone who “has spent his life in service to others.”

Kate Jones, a graphic designer, ended the conversation with this: “Donald Trump would hurt our country in certain ways and Hillary Clinton hurts our country in other ways. I think we need a person of integrity who listens to both sides and isn’t going to be partisan.”