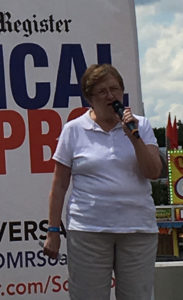 “I think he needs to work harder on getting bipartisan agreement on some of the larger issues,” Judge says.

Judge puts making the Social Security system solvent, reforming the immigration system and raising the minimum wage at the top of that list. Grassley delivered the Republican Party’s weekly radio address on Saturday. Grassley said he decided to avoid political fights “destined for failure” and focus on bills that would get bipartisan support in his Judiciary Committee.

Judge says it is “absolutely unacceptable” that Grassley will not at least schedule a committee hearing for the man President Obama nominated to fill the U.S. Supreme Court’s vacancy.

“We are seeing gridlock and obstruction coming out of Washington,” Judge says, “and that needs to end.”

Judge is also blasting Grassley and other Republican senators for delaying action on federal funding to combat the zika virus.

“This is the problem that we’re all seeing and we all understand. We’ve got to quit the politics and start finding some solutions,” Judge says. “You know, a wise man once said that if you are not part of a solution, then you are the problem and I think today we’ve got a United States senator who is not proposing solutions.”

Judge spoke this afternoon on The Des Moines Register’s Soapbox at the Iowa State Fair, a stop for many candidates. Grassley is not scheduled to appear at the newspaper’s venue.