You are here: Home / Agriculture / Farmers ‘starving for data’ about water quality practices 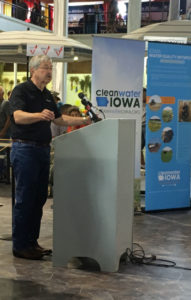 Governor Terry Branstad says if legislators adopt his water quality proposal in 2017, there will be more money spent to test the state’s waterways, to see if nitrate levels are declining.

“That’s really important. We want to have that,” Branstad says. “Farmers want that because that’s how you can see what works.”

Branstad says Iowa State University and the University of Iowa have projects that evaluate structures and practices designed to keep farm chemicals out of the state’s rivers and lakes.

A Tama County farmer who served as president of the Iowa Pork Producers six years ago says he’ll install a second structure to divert surface water draining off his farm this fall. John Weber of Dysart says the data from the first “saturated buffer” on his farm shows it’s working to ensure nitrates aren’t reaching the Cedar River Watershed.

“In the big picture, agriculture is starving for data,” Weber says. “We need this kind of data desperately to defend what we’re doing and to learn how to change, to make improvements in Iowa’s water quality.”

Weber is planting cover crops on 800 acres of corn and soybean fields. He has abandoned his previous practice of applying all his nitrogen fertilizer in the fall. Instead, Weber applies a third of it in the fall, a third in the early spring and then a third of it several weeks later when the crop needs nitrogen the most.

“This is an opportunity for entrepreneurs and small businesses to really step up…to work with our farmers individually,” Reynolds says. 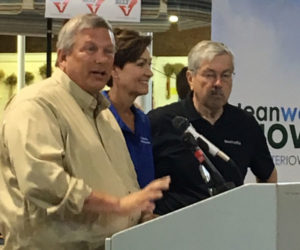 Iowa Ag Secretary Bill Northey says there are currently 45 “demonstration projects” underway around the state to show how nitrogen and phosphorus run-off can be reduced by land-management practices.

“Sixteen of those are in targeted watersheds,” Northey says. “…We have seven that are focused on different types of uses and how to be able to improve maybe cover crops with seed corn producers or livestock producers and then 22 are in urban areas where we have urban efforts like rain gardens and other kind of efforts that show that we can have activity in our urban areas that will improve water quality as well.”

Northey, Reynolds, Weber and Branstad spoke at a news conference this morning that was staged in the Iowa State Fair’s Agriculture Building.