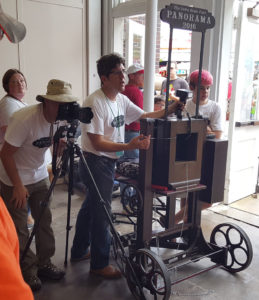 A pair of professional photographers spent the weekend at the Iowa State Fair working on a giant panoramic photo of fair patrons.

Tony Moline, of Dubuque, is helping with the project.

“What we’re doing is we’re walking around the fair, taking 200-plus photographs. We’ll stitch them all together into one 150-foot long photograph that will be on display at the fair next year,” Moline said.

While Moline was taking “backup” shots with a modern digital camera, Tim Olson was wheeling around a large, 90-year-old studio camera.

“I’m using an old camera from the 1920s and it’s not a panoramic camera, but we’re trying to replicate the look of a panorama that you might have seen from the 1920’s or teens,” Olson said. 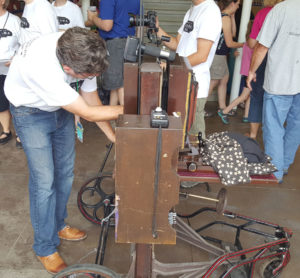 A native of Marathon in northwest Iowa, Olson now lives in Dubuque. He and Moline created a 110-foot long, black and white panorama of people who attended DubuqueFest in 2013. This will be a similar photo, but 40-foot longer.

Olson explained the final product while gathering photos of people inside the Agriculture Building on the Iowa State Fairgrounds.

The two photographers will take 200 or so photos for a panoramic shot.

“It’s going to be a long group portrait, like a stream of people with the fair as a background. So, in here, you’ll have the butter cow as the background,” Olson said.

The 150-foot-long panorama will be on display at the 2017 Iowa State Fair’s Cultural Center. The project is being funded by a grant from the Iowa Arts Council.