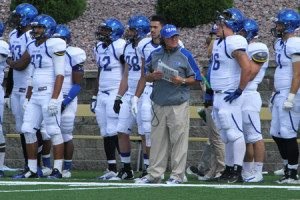 If the University of Dubuque football program is not considered an Iowa Conference heavyweight it is certainly getting closer. The Spartans are coming off their second league title in five years after posting an 8-3 overall mark in 2015, including a 7-0 record in conference play.

Repeating won’t be easy. The Spartans lost 27 seniors from a year ago and just nine starters return for a team that coach Stan Zweifel feels has potential.

“This might be the fastest team that I have put on the field since the 2005 and 2006 years at Wisconsin-Whitewater when we went to the national championship game”, said Zweifel. “I don’t know if we are deep in the offensive and defensive line but I think if we can stay healthy we could be playing in October and November for a conference title.”

Dubuque will rely on a new quarterback this season after Rio Johnson was denied his final year of eligibility. The East Carolina transfer passed for more than 24 hundred yards and 16 touchdowns in 2015.

“He was the player of the year in Alaska from Anchorage, Alaska. He started the Coe game last year in which we clinched the conference championship and did throw four touchdowns. The thing that he lacks is experience in games over a course of a season.”

Dubuque opens the season at home on September 3 against Bethel of Minnesota.