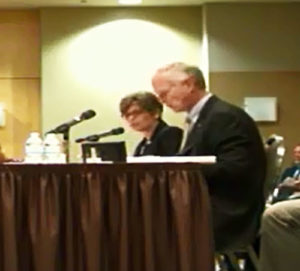 Iowa Senator Joni Ernst and fellow Republican Senator Ron Johnson of Wisconsin held a hearing in Dubuque Wednesday on the impact of regulations on agriculture.

Ernst is a member of the Senate Homeland Security and Governmental Affairs Committee which Johnson chairs. One of the witnesses was David Fritz, the president and volunteer director of the Potosi Foundation which runs a craft brewery the distributes beer in Wisconsin and eastern Iowan.

“Craft breweries are a rare manufacturing success story that is fueled by the farmers providing quality ingredients. Sixty-five percent of the U.S. barley crop is used by the brewing industry. And of that number, 35 to 38 percent is used by craft breweries,” Fritz says. He says government regulations can drive up the costs for producing the beer. He cited an example.

“The FDA menu labeling issue that stems from the Food Modernization and Safety Act will be very costly to brewers. Restaurants with more than 20 locations are required to provide additional information on beer and other spirits, and the cost would likely fall on the brewery to provide,” Fritz explains. He says it could cost Potosi one-thousand dollars for each beer they brew to provide the information to the restaurants about the beers. Fritz says large breweries can absorb the costs of regulations better than the small breweries and that can lead to the smaller breweries closing or being bought up by the larger companies.

Rosendale, Wisconsin farmer Jim Zimmerman says the EPA’s regulations on the herbicide atrazine are not based on sound scientific evidence and could drive up the cost of production for crops at a time when prices are falling.

Senator Ernst says the increasing regulations follow a pattern of the current administration that is hurting the economy.”Those overreaching rules and regulations are burdening our employers and our businesses, and we are not growing our economy like we could be and should be here in the United States,” Ernst says. She says it is important for lawmakers to continue working to rein in the regulations.
“I know that Senator Johnson has been very diligent in approaching how we can reform the rules and regulations and do it in a way where we are involving stakeholders — because often times just as some of the examples that were given today — the stakeholders are not involve din the process. And these agencies are not following original congressional intent,” Ernst says. Senator Johnson closed out the hearing.

“I’ve always have said that overregulation is the silent killer. It crushes innovation, it crushes small businesses, it crushes any kind of competition that we need to grow our economy, which is the number one component of the solution,” Johnson says. Johnson says it doesn’t matter which state you are in, the regulations impact everyone.

“If we want opportunities, whether it’s in the city of Milwaukee or anywhere in Iowa or Wisconsin, we need to grow our economy,” Johnson says. “And this enormous regulatory burden is making it very difficult for businesses to grow and create those good-paying jobs that we all want.” The hearing today was called “From Crop to Craft Beer: Federal Regulation’s Impact on America’s Food and Agriculture.”