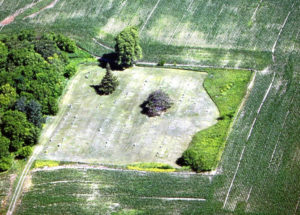 A celebration is planned next month at a pioneer cemetery in central Iowa’s Jasper County near Mingo.

Sams Cemetery is the final resting place for about 200 early Iowans, including 60 children, eight Civil War veterans and John Sams, the graveyard’s namesake who died of measles. Bob Gannon was raised on a farm nearby and he already has a grave marker in the cemetery.

“The legend is that if you hear the wind chimes, it’s the voices of angels,” Gannon says, “and if you are very still, you can hear your loved ones.”

The earliest grave in the cemetery is a three-month-old child who died in 1855. The most unique aspect of Sams Cemetery is the outline. From the air, you can clearly see the shape of Iowa. A public celebration is planned at the cemetery in September which will include the mass installation of wind chimes donated by an artist colony in California. Organizers are promoting a picnic, program and entertainment to honor the Civil War patriots and all of the children buried at Sams Cemetery.

“There’s a lot of children today that have never even been to a funeral, let alone a cemetery, and it’s kind of shocking in a way,” Gannon says. “These people cut the ground and came here so that we now have these freedoms and joys to be here. This is our history.” Sams is Iowa’s newest Pioneer Cemetery, though a legal dispute is underway to determine who owns the land. Steve Story is with the State Association for the Preservation for Iowa Cemeteries.

“It just became a Pioneer Cemetery legally this last February,” Story says. “That’s done, but we knew there was some disheartening between two sides and that’s what has happened, and so I’m not sure what’s going to take place next.” Iowa’s pioneer cemeteries are being resurrected after generations of neglect, thanks to the Pioneer Cemetery Law passed 20 years ago. It grants counties authority to repair and maintain some of the state’s forgotten graveyards. Joyce Wiese Heads Tama County’s Pioneer Cemetery Commission, which has fixed up and fenced in 28 cemeteries countywide.

“You go to cemeteries today and some of the big ones, they’re well kept and mowed, everything done real good, but the ones that actually made it so they could be here today, they just ignore,” Wiese says. “To me, it’s disrespect.” There are more than 5,000 cemeteries in Iowa.