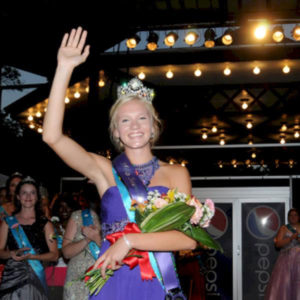 The 2016 Iowa State Fair Queen won the fair’s celebrity goat milking contest this year and now 20-year-old Amanda Riniker of Winthrop is preparing to start her sophomore year at Wartburg College in September.

“I want to work in the medical field, for sure,” Riniker says. “Right now I’m thinking some sort of therapy, so physical therapy, occupational therapy — something that route — and I want to do pediatrics, for sure.”

Her major is neuroscience.

“I take all the ‘bio’ classes, the psych classes, chemistry,” she says. “All the sciences, pretty much.”

Riniker was one of 103 queens from county fairs who competed for the title of State Fair queen.

“I didn’t really know what to expect coming into it,” Riniker says. “But when you walk into a room of a hundred other beautiful girls, it’s really intimidating, but over the week it was just really fun to get to meet all the different county queens from all across the state of Iowa and it was a really great experience and I think the interviews help you build your leadership skills and, overall, it s a great competition.”

Riniker was the Buchanan County Fair Queen. Contestants in the State Fair Queen competition are judged their personality, attitude, leadership, citizenship and community involvement as well as their overall appearance, charm and poise. The next competition Riniker enters will be on a track.

Riniker was the president of her local Future Farmers of America chapter. She was a 4Her, too. During her week-long run as Iowa State Fair Queen, she handed our ribbons, measured the beards in the fair’s longest beard competition and milked a goat — and her crown didn’t slip once.

“It is attached with bobby pins and elastic,” she says, “very securely attached.”

This isn’t Riniker’s first run around the fairgrounds.

“I”ve been here ever since I was a little girl and I’m even learning so many awesome things about the State Fair,” Riniker says. “I think everyone needs to come out and visit it if you live in the state of Iowa. It’s definitely, like, one of the great things about our state.”

Riniker has another $8,000 worth of college scholarship money from winning the state fair queen competition.