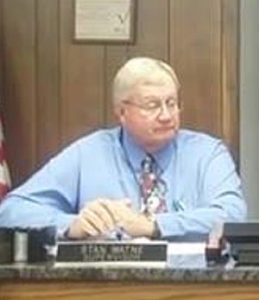 The Wright County Supervisors this morning approved the development agreement for the Prestage Foods pork processing plant south of Eagle Grove. The board also approved the urban renewal plan that would allow the financing of construction of wastewater treatment facilities, resurfacing and improving roads to the plant facility.

The chair of the Wright County Supervisors, Stan Watne, talked about the public hearing on the issue. “We had about 40 speakers who were in favor of the project and about 10 who were against doing it,” according to Watne. “I was so pleased, it was very civil and very respectful.” Watne says in the end, the benefits of the $240 million dollar plant led to good support.

He says the assessed tax value of the plant is $111 million — which is about a 12 percent increase in the county’s assessable tax value. “It was really a big project and a lot of people were seeing the advantage of having the jobs, improving our tax base, and there were a lot of other jobs that we didn’t even talk about that were going to be spin offs from this that are really exciting,” Watne says. The supervisor says they did listen to those who have concerns about the plant.

“We know that there are going to be problems with a project of this size — we may not even know what those challenges may be. But with the Iowa and can do spirit, we are going to meet the challenges and move forward Wright County officials will issue permits in the coming weeks and he says the company still needs to secure all state permits before beginning construction.

“Their best hope for starting construction would probably be in October. That would coincide well with getting the crops off of that farm and clearing it so they are able to get their work done out there,” Watne says. “I think our best hope would be October of 2016 to break ground and it will take almost two years to build the plant.” The Iowa Economic Development Authority awarded $11 million in state tax credits for the Prestage project last Thursday. The new plant is expected to employ up to 950 people.