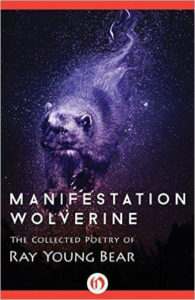 An Iowa author has won an American Book Award for a book of poetry.

Ray Young Bear’s “Manifestation Wolverine” is a collection of poems he’s written over the past 45 years.

“That was a great honor to be recognized for all of those years that I’ve sat here at home plugging away at some of these poems that took four to eight years to revise,” Young Bear says. “All those years of being extra careful with my words has paid off.”

Young Bear lives on the Meskawki Settlement near Tama. Young Bear says he became a “word collector” at a young age and experimented with symbols and his imagination.

“Throughout the year I’m in various stages of writing whether I’m tackling fiction one week or poetry the next week. It’s just a constant process of being by myself with this great big blank screen in front of me,” Young Bear says. “…It isn’t really a lonely endeavor as I sometimes think it is because eventually, at some point, whether it’s in New York or India, my work will be read by someone.”

Young Bear has written six books and he’s working on three more. One is fiction and one is non-fiction. The third book is a collection of stories, poems and translations from the Meskwaki language.

“I feel that the Meskwaki settlement is quite historic and all of those things that you want a tribe to be, we are there,” Young Bear says. “However, we are also facing linguistic atrophy that is prevalent among most Native American tribes in North America today.”

Young Bear often writes from 6 a.m. to 3 p.m. every day, but he also tries to spend time outside to get inspiration.

“I want to be consumed by everything that’s around me, whether it’s the trees, the sky and all the interactions therein and then somehow pull something out it,” Young Bear says. “Like the other day I was going east of my house, trying to assess how much lawn mowing we would have to do when a black mink pranced out…hopping, zig zagging through the wet grass and I thought that was a marvelous image that I could eventually develop.”

A panel of writers, editors and publishers selected the winners of the 37th annual American Books Awards. A ceremony will be held in San Francisco in late October to honor Young Bear and other recipients. Young Bear’s 66th birthday is in November and he’ll decide closer to the date of that October 30th event whether he is able to make the trip to California.