You are here: Home / Business / Casino in Sloan addresses ‘downside’ of smoking on gaming floor 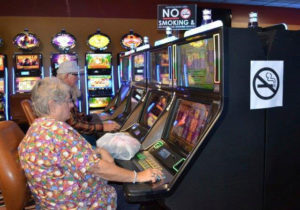 The Winnavegas no smoking room.

“So many people out there love to gamble and hate cigarette smoke,” says Travis Morgan, a spokesman for the WinnaVegas Casino in Sloan.

A state law that went into effect July 1, 2008 bans smoking in public places, but Iowa’s casino industry got an exemption that has allowed smoking to continue on the gaming floors. Officials with the state-licensed casinos say banning smoking would put them at a competitive disadvantage and they have opposed efforts in the legislature to start enforcing the smoking ban inside the casinos.

The Native American casinos in Tama, Onawa and Sloan are not state licensed. The Winnebago Tribe of Nebraska operates the casino in Sloan.

“We’ve given WinnaVegas a big room — 70 slot machines — where you can come, gamble and not have to worry cigarette smoke, cigar smoke, pipe smoke, nothing,” Morgan says. “It’s just an option that you have now at WinnaVegas that we hope is going to bring a core group of people to us because we’re the only ones that have something like this.”

Morgan says many customers consider the smokey casino floors to be a “downside” to their gambling experience.

The casino is about 20 miles south of Sioux City. The Omaha Tribe of Nebraska operates the Blackbird Bend Casino in Onawa, Iowa. The Meskwaki Tribe’s casino near Tama opened in 1992.