You are here: Home / News / Ernst says her fundraiser will be ‘build up’ for GOP ticket (AUDIO) 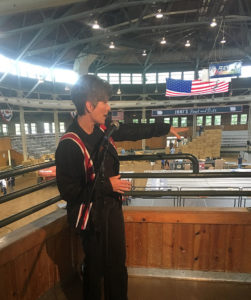 Ernst describes the event as a “build-up” to November.

“It is about exciting our base and energizing them and this is perfect opportunity,” Ernst said late this afternoon. “We’re right coming up against that Labor Day weekend which traditionally kicks off the campaign season.”

Ernst will be the lead motorcyclist on a late morning ride that will start at the Harley Davidson dealership on the north side of Des Moines. Last year’s ride raised about $15,000 for a veterans charity known as the America’s Fund. This year’s beneficiary of ticket sales for the motorcycle ride will be Soldier Strong. It’s a non-profit that partners with high tech companies that help wounded veterans.

The ride will cover about 42 miles and end at the state fairgrounds early Saturday afternoon. That’s where crews have set up a stage — complete with bales of straw — inside the fair’s huge livestock show ring.

“We did choose to do it inside the pavilion,” Ernst said. “We were a little concerned aboutg the rain, so in order to get it set up on time we just made that call.”

Ernst gave about a dozen members of the media a tour of the set-up late Friday afternoon. During a news conference, Ernst was asked about the current campaign charges of racism and bigotry being thrown about between Trump and Hillary Clinton.

“I’m not going to get into that,” Ernst said. “What I would say with both of them, because there have been a lot of barbs thrown at each other, is that they need to take this into a civil discourse and we’re not seeing that right now. I don’t like it when campaigns go that direction and I would say of both of them, you know, ‘Back down and let’s really talk about the policies and the issues.'”

Ernst told reporters the bleachers that ring the livestock pavilion can seat about two-thousand people and there will be more seating inside the showring, in front of the stage. Senator Chuck Grassley, Iowa’s three Republican congressmen and Republican congressional candidate Chris Peters will speak to the crowd, along with Trump, Governor Terry Branstad and Lieutenant Governor Kim Reynolds.