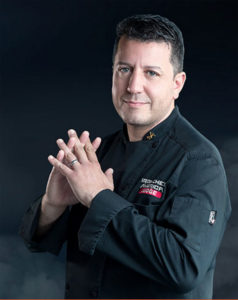 A judge on the Food Network’s “Iron Chef America” is launching his nationwide tour of restaurants in Iowa to educate Americans about “real” Italian cooking.

Chef Mario Rizzotti came to the U.S. from Rome more than 20 years ago and went to work in a restaurant as a dishwasher. He saw meals being served that claimed to be Italian but that he’d never heard of before. Rizzotti is calling this year-long trip across America his “4 the Love of Italian Food Tour.”

“What we’re trying to accomplish is to promote the healthy benefits of authentic Italian food and authentic Italian ingredients,” Rizzotti says. “There are so many things out there that we consider ‘Italian’ that in Italy, we don’t even have.” He vows that he won’t be flying from city to city on this journey.

Rizzotti says, “I’m going to actually drive from Chicago with one of my chefs and we’ll load up the car with prosciutto di San Daniele, with parmigiano di Giano, with many other ingredients that are very hard to find in those cities.” Rizzotti’s first stop is Sunday in Sioux City at Trattoria Fresco, for a special charity dinner to benefit the Sioux City Farmers Market. The road to healthier eating, he says, begins with portion control.

“We sometimes have the perception that a plate of pasta has to be overflowing your dish. We have a perception that we have tons of sauce in our dish, that’s part of the dish,” Rizzotti says. “Well, it’s the opposite. In Italy, our portions are much smaller and the quantity of the sauce that we use is just enough to give a color and taste to the pasta.” The restaurant tour is designed to teach Americans about authentic Italian food products, helping them distinguish real from fake, and how those real ingredients can help reduce many health issues related to poor eating.

Rizzotti says, “It’s all about one main ingredient that should be on every single dish that we cook, Italian or not, and it is the passion for the food.” He says he lives by one simple motto: “An authentic Italian meal is not the consumption of food, but a celebration of Dolce Vita.”

In addition to the Sunday stop in Sioux City, Rizzotti will return to Sioux City next Wednesday. To kick off the tour, he’ll also be visiting restaurants in Sioux Falls, South Dakota, and in Omaha and Lincoln, Nebraska.