You are here: Home / Sports / Game week begins for Iowa and Iowa State 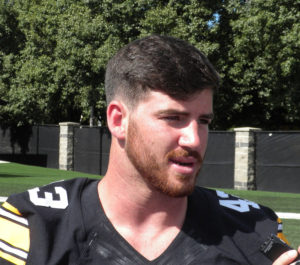 Game week is here for Iowa and Iowa State as both teams open at home on Saturday. The Hawkeyes take lofty expectations and a number-17 ranking in the Associated Press Poll into their opener against Miami of Ohio.

Junior linebacker Josey Jewell says the Hawks have focused more on the two losses to end last season than the perfect 12-0 regular season.

“We are trying to look ahead and trying to forget about last season”, said Jewell. ” You also have to have that in the back of your head and try to do better than last year and not have that happen again”

The Matt Campbell era begins at Iowa State when the Cyclones host Northern Iowa. Campbell says it may be game week but the evaluation process continues for the new staff.

“It is still the development of some of the young guys in our program and how do they fit to what we are doing and can they challenge some of the older guys that are playing”, said Campbell. “I don’t think our evaluation can stop even three or four weeks into the season.”

UNI enters the season with high expectations ands the Panthers are ranked fifth in the FCS preseason coaches poll.