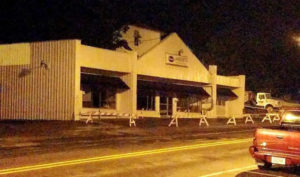 The roof collapsed Monday on the Ottumwa Laundrette.

Monday night’s storms may have been a contributing factor in a building collapse in southeast Iowa.

Washers and dryers were still running inside the Ottumwa Laundrette when firefighters arrived minutes after 8 o’clock Monday night to find the roof almost completely caved in.

Two people were inside the laundromat when the roof gave way and other bystanders on were on the sidewalk. There were no injuries reported.

Witnesses said that the roof “just all of a sudden came down.” They said that there were no warning signs before the collapse. Firefighters feared a second collapse, closing portions of the nearby sidewalk. The cause of the collapse is under investigation.