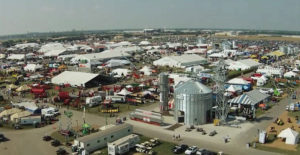 The grounds of the Farm Progress Show in Boone.

The central Iowa town of Boone is welcoming thousands of visitors to the 63rd annual Farm Progress Show.

The nation’s largest outdoor farm show opened this morning. Event spokeswoman Dena Morgan says it  features the latest ag technology, including new products to be unveiled by many of the industry’s largest manufacturers.

“We’ve got a great lineup, of course, lots of things happening out in the demonstration fields,” Morgan says. “We’ve got corn combining at 11 every day, tillage at 1. If you’re a livestock producer and you’re in the market for a chute or some other kind of cattle-handling equipment, we have working cattle demonstrations every day at 10 and at 2.” The show will host more than 600 exhibitors displaying new farm equipment, seed and crop protection products, farm supplies and services. Since the last day of the 2014 show had to be cancelled due to lightning, Morgan says there are two ways you can be updated, by using the website Farm Progress Show-dot-com, or by using a free smart phone app.

“All you have to enter is ‘Farm Progress Show 2016’ and that should bring up the current year app,” Morgan says. “You can search for exhibitors, you can look at the show fields, all kinds of things.” For about 50 years, the show rotated between locations in Iowa, Illinois and Indiana, but now, it’s held every other year in Boone or Decatur, Illinois.

“We started the rotation that we have now in 2005 when we moved the show up into August,” Morgan says. “It used to be later in September and we moved it almost a month earlier and went to the rotation of just two sites and then having permanent sites.” The show runs three days, closing on Thursday.