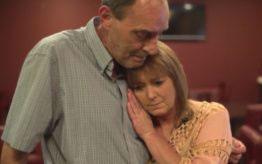 A Kentucky woman traveled to Omaha last week to hear her boy’s heartbeat for the first time in four years.

Dawn Grace’s 14-year-old son, Calen, accidently shot and killed himself while playing with a gun he thought was broken. His mother decided to donate Calen’s organs and helped to save five people, including an Iowa man.

“I think we made a great decision,” Grace says. “I think Calen is looking down on me and he’s proud of what his mama did. He’s proud his mama knew who he was. I know Calen is with me and Calen is with Joe.”

Fifty-one-year-old Joe Hansen of Council Bluffs suffered from heart problems for years and after being placed on a transplant wait list, received Calen’s heart in 2012. Since the operation, Hansen and Grace have been writing emails, letters and talking on the phone.
“Everything basically I do now is trying to honor Calen and his memory,” Hansen says. “I always think to myself when I’m in situations, ‘How would Calen handle this? Would Calen approve?’ He keeps me on the straight and narrow.” Grace met Hansen in person for the first time last Friday and with his permission, pressed her ear to his chest.”And I heard my baby’s heartbeat,” Grace says. “I felt it and it’s just as strong as ever.” Grace hopes Calen’s story inspires more people to become registered organ donors.