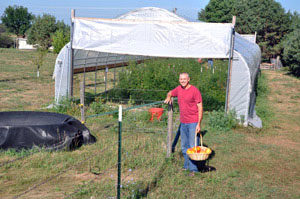 Many Iowa churches have large gardens from which they help feed the hungry, but a Davenport church is launching an effort to grow fruit and vegetables virtually year-round, thanks to the U.S.D.A.

Rogers Kirk is pastor of the Third Missionary Baptist Church which will enjoy a long growing season because its garden will be in a large greenhouse-type structure called a “high tunnel.”

Kirk says, “What we’re looking to do is to establish these high tunnels throughout the Midwest in many places and really just try to get people to eat healthy, provide food for them, and provide some entrepreneurship, and things of that nature.” Pastor Kirk says many residents of the Quad Cities don’t have access to fresh fruit and vegetables and his church members plan to use the high tunnel to help them.

“There’s poverty within this area,” Kirk says. “It falls within that guideline. What better place to have one where people can come and get fresh vegetables. We can set it out for them. We can take it to the farmers market. You know, kids can help to be a part of working this.” Third Missionary Baptist owns an empty lot less than a block from the church. Kirk says a contractor will use a federal grant to build an $8,000 high tunnel by the end of September. U-S-D-A conservationist Shawn Dettmann is meeting with other local pastors to teach them how the agency can help.

“High tunnels are one of our most popular practices with beginning farmers, people who don’t have a lot of acreage to devote to farming,” Dettman says, “and people who are really interested in producing organic food as well.” Pastor Samuel Thompson from Mississippi is the liaison from the National Baptist Convention to the U.S.D.A. He says the goal is to serve disadvantaged growers in both rural and urban areas.

“I was raised on a farm and that’s why I don’t have a problem working, I was raised working,” Thompson says. “We had a schedule, we knew what we were to do and we did it. We were never hungry. We ate something from the farm every day and we had a big freezer so my mother would can and put things up. With a high tunnel, you can get fresh vegetables year-round.”

More than 20 congregations in the Quad Cities area alone are eligible to receive funding from the U.S.D.A. for the high tunnels.