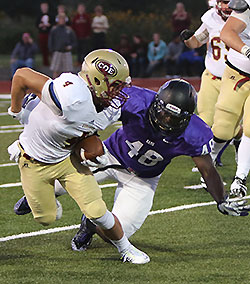 Kinnick Stadium won’t be the only place hosting a football rivalry on Saturday night. Cornell will host Coe at Ash Park in the oldest rivalry west of the Mississippi River. The schools first met on the gridiron back in 1891.

“This will be the 72nd consecutive time we have played them and the 126th time overall”, said Coe coach Tyler Staker. “This is a fun rivalry and one that has stood the test of time.”

Staker has played and coached in this game and is in his first season as the head coach after taking over for his father Steve. The Kohawks opened with a 35-20 win over Wisconsin-River Falls and have won the last 16 games in the series.

Cornell opened the season with a 51-21 victory over Iowa Wesleyan and the Rams will try to restart the rivalry.

“And we have to play better in order to keep it a rivalry”, said Cornell coach Vince Brautigam. “Coe is a very good football team and it is an honor to be part of it.”

Brautigam says playing under the lights will help add to the atmosphere.

“We made it a night game a few years ago for the atmosphere”, added Brautigam. “Now Iowa-Iowa State is playing at night and that will take some of that away but we can’t keep changing our schedule.”

Cornell will be in search of its first home victory over the Kohawks since 1988. Coe holds a 70-51-4 advantage in the series.