You are here: Home / News / Judge says ‘women still have a ways to go’ in achieving economic fairness 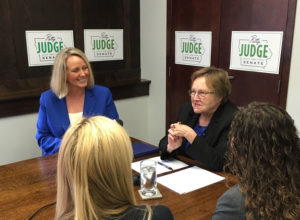 Patty Judge talks with women about issues impacting them.

“We’ve come a ways, but we still do have a long way to go,” Judge said to open the discussion. “Our economy is better, but it’s still not wonderful and so there’s things we need to attend to.”

The seven other women around the table expressed support for things like a federal law that would require companies to provide paid family and medical leave. In addition, the group discussed the costs of child care and college debt.

“This is probably the single issue that I’ve heard the most on the campaign this year, for the last 8-10 months, is the student loan debt and how that’s impacting the lives of young professionals as they try to get their feet under them,” Judge said.

Judge said, as a senator, she would vote to allow college graduates to restructure their loans and “go shopping” for better interest rates. Judge also promised the group she’d vote for the Paycheck Fairness Act.

Judge said progress has been made for her gender since the time years ago that she was told “only her husband” could sign documents for federal crop subsidies.

“I can remember just like it was yesterday how angry I was because they had had no problem whatsoever in having me sign the mortgages. I was absolutely obligated for that debt,” Judge said. “…I think we’ve gotten over that, but we still have a ways to go because we know today women are still earning, in Iowa, about 77 cents on the dollar.”

That would be comparing the average earnings of Iowa women and men in the state. Judge, a Democrat, did not mention Senator Chuck Grassley, her Republican opponent during the hour-long discussion. Judge’s campaign sent out a news release later, criticizing Grassley for voting against the Paycheck Fairness Act five times and for twice voting against the Fair Pay Act that is now law.

In 2014, Grassley said he voted against the Paycheck Fairness Act because “the bill will do nothing to address our anemic economic growth.” Grassley also suggested the bill would be a “boon to trial lawyers at the expense of job creators and job seekers.”

“It is well documented that she had an abysmal record on gender pay equity as Secretary of Agriculture,” Robert Haus said. “…If this issue was so important to her, she had a huge budget and ample authority to have fixed it. As usual, she didn’t.”