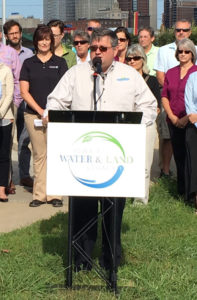 “We do not have a way to dedicate long-term funding to water quality efforts,” Leeds said. “We need to make those investments.”

Leeds said Iowa lawmakers boosted taxes for the state’s transportation system in 2015 by raising the state gas tax and his group will lobby lawmakers will make the same kind of investment decision for water resources in the state.

“I am more optimistic than I have ever been that we can make that case,” Leeds said. “We can win that argument and begin improving — substantially improving — water quality and other resources in this state.”

The state’s largest farm organization is no part of the coalition, but Leeds points to the Iowa Farm Bureau’s decision this past week to support efforts to find existing or raise new state tax revenue for water quality initiatives. Leeds predicts “political compromises” are ahead. 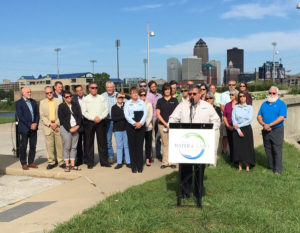 “I remain hopeful and somewhat optimistic that we will navigate all of those various options and we will come up to a solution that works,” Leeds said. “…I do believe that a vast majority of Iowans want to see improvements in water quality, enhancements in soil and additional recreational opportunities.”

Jan Glendenning, the state director of the Nature Conservancy, has been working on this issue for a decade and she’s “optimistic” the tide is turning.

The CEO of a beer distributing company based in Council Bluffs has agreed to be co-chair of Iowa’s Water and Land Legacy. That’s the name of the coalition. The group supports a three-eighths cent increase in the state sales tax. An estimated $180 million would be raised annually. About 60 percent of it would be used for on-the-farm practices that improve water quality. The rest would be used for projects that enhance outdoor recreation with investments in parks, trails and lakes.

Kircher and about two dozen others held a news conference today near the confluence of the Des Moines and Raccoon Rivers to announce the expanding membership in Iowa’s Water and Land Legacy.

The group did not mention the Des Moines Water Works lawsuit that challenges the voluntary efforts of Iowa farmers to control farm chemical run-off into the Raccoon River. The utility uses the river as its main source of drinking water for more than 250,000 central Iowa customers.