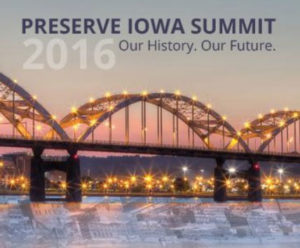 The fourth annual “Preserve Iowa Summit” will be held later this week in Davenport, focusing on historic preservation efforts across the state.

Michael Morain is spokesman for the three-day conference. He says the summit presents a range of educational sessions on preservation topics, tours, demonstrations and opportunities to network.

Morain says, “The historic preservation folks will gather from all over the state to learn more about how to preserve the historic buildings that make up the backbone of so many of our smaller towns and bigger cities.” During the conference, people who are involved in saving our aging buildings and the history they contain will be attending a wide range of 35 unusual workshops.

“There’s one session on the fad for pre-made houses, for kit houses,” Morain says. “You could just look through the Sears catalog and order all of the parts for your mail-order house and build it right there. There’s some interesting sessions on historic wallpaper and all you can learn from the clues just by digging through the layers in wallpaper.” One of the keynote speakers will talk about the long-ago movement to help runaway slaves escape to freedom.

“Especially in Iowa, the history overlaps with underground railroad efforts during the Civil War and in the years that followed the Civil War, Morain says, “and how a lot of this history and the bones of towns can tell clues about the people who lived there.” The conference opens on Thursday, running through Saturday.