Republican presidential nominee Donald Trump told a crowd of 1,600 in Iowa today that his campaign is “making very big progress.”

“And then in Iowa, virtually every poll has us ahead and we are going to win Iowa,” Trump said at the start, to cheers.

Trump made no mention of Hillary Clinton’s pneumonia, but he did bring up Clinton’s comment that half of Trump supporters come from a “basket of deplorables.”

“While my opponent slanders you as deplorable and irredeemable, I call you hard-working American patriots who love your country and want a better future for all of our people,” Trump said, to cheers. 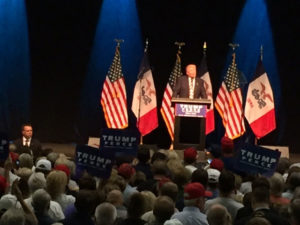 Around 1,600 people turned out for Donald Trump’s rally in Clive.

Trump spoke for half an hour, the shortest speech he’s given at a rally organized by his campaign in Iowa. President Obama was speaking in Pennsylvania at a Clinton rally at nearly the same time. In addition to critiquing Clinton, Trump blasted Obama on a few fronts. The crowd booed when either Obama and Clinton were chastised.

“Then you’ve got to vote for Trump. It’s very simple,” Trump told the crowd after one loud round of boos. “Very simple.”

Trump drew a rousing response from the crowd when he criticized Obama for not using the term “radical Islamic terrorists.”

“This is an evil, sadistic, monstrous enemy and we must keep these killers out of our country,” Trump said.

Trump will unveil a policy proposal on child care later today in Pennsylvania. His daughter, Ivanka, cited the expense of child care during her speech at the Republican National Convention. She promised in Cleveland that her father would “focus on making child care affordable and accessible for all.”

And Feeken thinks there’s a real possibility Trump can win Iowa this November.

“I always consider Iowa’s going to go Democrat no matter what, but I think and I hope he’s brought a lot of people out that typically don’t vote,” Feeken said.

Feeken always votes and he backed Trump in the Iowa Caucuses this past February. He’s supported Trump since June of 2015, when the businessman officially got in the race, because he’s a different kind of candidate.

“I’ve always been a staunch Republican, but there’s no difference today between the Republicans and the Democrats,” Feeken said. “We put ’em in power so they can change and give America back to us. I’m sick of Republicans acting like wusses.”

Most of the crowd stood for the event. Mary Nolan of Fort Dodge got to the venue early enough to get a seat on the bleachers. Nolan has contributed to Trump’s campaign because he’s a “real person” and not a politician.

“He’s working for the people. I truly believe that,” she said. “He’s got some rough spots, but I think he’s great.”

Nolan wants Clinton to lose “even more” than she wants Trump to win.

“Hillary is despicable and there’s no way she should not be in prison,” Nolan said.

As the crowd waited for Trump to arrive, the “lock her up” chant was occasionally heard in the hall. A protester at one point yelled “release your taxes,” as Trump spoke. The crowd chanted “USA!” as the protester was escorted out of the rally.

Clinton’s campaign held a news conference across the street from the rally site this morning, featuring “millennials” who support Clinton. A Clinton campaign spokesman said millennials reject Trump because “his hateful rhetoric, dangerous policies, and offensive comments” are “tearing the country apart.”