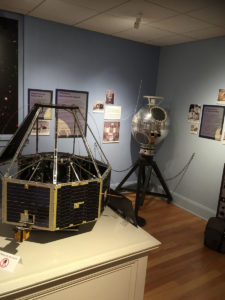 Spare flight models of Injun 3 flown in the early 1960s and Hawkeye (foreground) flown in 1975.

Six decades of achievements in space exploration at the University of Iowa are being highlighted in a new exhibit at the Old Capitol Museum in Iowa City.

The exhibit’s principal organizer, Cornelia Lang, is a U-I professor of physics and astronomy. Lang says many people don’t realize that between 1951 and 1975, dozens of major space-bound projects were created in-house on the U-I campus.

“That’s something younger people especially don’t appreciate right now,” Lang says. “In those years, before NASA was really up and managing these space projects, the University of Iowa was the premiere site in the world for space instrumentation.”

The exhibit includes several replicas of satellites and devices that were designed and built by U-I scientists, including Injun 3 and Hawkeye. There’s also a spare antenna from the space probe called Juno.

“This is a spacecraft that just arrived at Jupiter a few months ago,” Lang says. “The University of Iowa has one of the most exciting instruments on that spacecraft that’s listening to radio waves in the plasma in Jupiter’s magnetic field. We have a copy of the instrument, life-size, that’s onboard that mission.”

One of the U-I’s most famous space scientists is the late James Van Allen, who was the first to identify radiation belts around the Earth in the 1950s — which were named after him. As part of the exhibit, there’s a rare device called a “planeterella” which helps to explain Van Allen’s discovery.

“It actually creates plasmas that simulate the aurora and the Van Allen radiation belts,” Lang says. “It’s based on a 19th century European design that was used at World’s Fairs and things like that and there are only 14 of them, including ours, on the planet right now.”

Visitors will also see a vintage “rockoon,” an invention of Van Allen’s, a rocket-balloon combination that laid the groundwork for instrumentation aboard Explorer One, the first U.S. satellite to reach Earth orbit. The exhibit will be at the Old Capitol Museum through May.