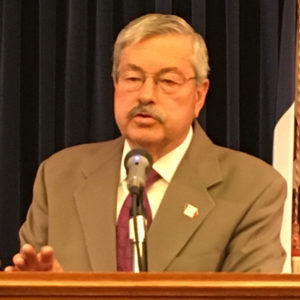 Governor Terry Branstad’s son is state director for Trump’s campaign and Branstad has been urging Iowa Republicans to unite behind Trump since May.

“I traveled with (Trump) from the Des Moines airport to the ‘Roast and Ride’ event for Joni Ernst and he specifically mentioned in his speech that he supports keeping the Iowa Caucuses first,” Branstad said.

Branstad told reporters this morning he is “very concerned” about Clinton’s position on the Caucuses.

“And she has not made it clear that she supports keeping the Iowa Caucuses first,” Branstad said during his weekly news conference.

Two hours after Branstad’s comments, a spokeswoman for Clinton’s campaign issued a statement, saying: “Hillary Clinton has and will continue to support Iowa’s first in the nation status.”

Trump finished second in Iowa’s Caucuses. A few days later Trump accused caucus winner Ted Cruz of committing “fraud” and Trump asked for either a “new election” in Iowa or for the Caucus results to be “nullified.” In speeches in Iowa over the past couple of months, Trump has said he prefer primaries to caucuses, too.

“He prefers primaries over caucuses. I understand that, but that’s not our system,” Branstad said today. “He supports keeping the Iowa Caucuses first.”

Branstad told reporters he’s “concerned” Clinton’s loss in Iowa’s 2008 Caucuses and her virtual tie with Bernie Sanders in 2016 have soured her on Iowa’s lead-off status in the presidential selection process.

“Iowa has embarrassed her and Iowa has been a problem for her again and again and again,” Branstad said. “…It’s obvious that I think she’s got an Iowa problem.”

The Iowa Democratic Party’s executive director issued a written statement early this afternoon, calling Branstad’s statements “ridiculous” and he suggested Branstad “has decided to join Donald Trump by embracing conspiracy theories that have no basis.”