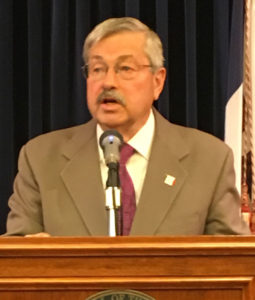 Governor Terry Branstad today said he “has some concerns” about a proposal from Iowa State University’s president, that juniors and seniors pay higher tuition than freshmen and sophomores.

“A lot of our students are starting out at the community colleges because they can’t afford to go to the state universities, so we don’t want to penalize them by having a higher tuition for them in their junior and senior years,” Branstad said.

ISU president Steven Leath unveiled the “two-tiered” tuition proposal last Wednesday during a speech on the Ames campus. Branstad first heard of the idea “over the weekend” after news reports outlined Leath’s idea. Branstad said the board that governs Iowa State needs to “carefully study” the proposal, to ensure ISU doesn’t price itself out of the market for community college transfers.

“We already know that a lot of students are starting in the community colleges and I think one of the reasons for that is the cost,” Branstad said during his weekly news conference.

Eight years ago, half of Iowa State’s operating budget was financed by students through tuition payments and the other half was state taxpayer support. Leath said last week that the state finances about 30 percent of Iowa State’s general operations now, and students’ tuition pays the other 70 percent. Branstad told reporters he doesn’t know “what the right mix” should be in terms of state funding.

Iowa State’s main challenge now is overcrowding, according to the governor.

“But it also says something about the fact that Iowa students and their families see because they have programs like engineering and agriculture that are much in demand, they’re a leader in STEM education — those things have benefitted Iowa State University,” Branstad said.

On a related topic, Branstad praised members of the Board of Regents for saying they’ll start coming up with two-years worth of tuition recommendations at a time. Branstad says that will help students and their families better budget for the cost of going to Iowa State, the University of Iowa and the University of Northern Iowa.