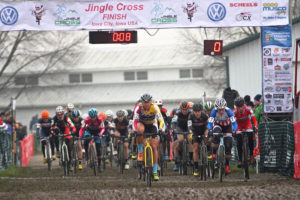 An international sporting event underway in Iowa City this weekend has an audience infinitely larger than the Iowa-Iowa State football game.

The Telenet UCI Cyclo-Cross World Cup is drawing 2,500 athletes, 10,000 spectators and a global TV audience of 10 million. Shawn Brett, spokesman for Peloton Sports, says cyclo-cross is sort of like the track-and-field event called steeplechase, except competitors are on bicycles.

“There’ll be obstacles set up like stairs, a sand pit and barriers and they’ll have to dismount their bikes and get over those barriers,” Brett says. “On Saturday, during the World Cup, when you have the best athletes in the world, they’ll actually be able to ride over those barricades.”

Amateur levels are underway today at the Johnson County Fairgrounds while professional cyclo-cross racers from around the globe will be competing on Saturday. 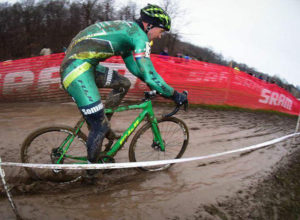 “Although cyclo-cross is kind of new to the fanbase here in the United States,” Brett says, “in places like Belgium and Denmark, it’s their national sport.” Competitors are from all over the planet, including: Belgium, Denmark, Canada, Great Britain, France and the Czech Republic. With cyclo-cross, the show must always goes on, despite freezing or boiling temperatures, snow, ice — or in the case of Iowa City — rain and mud. Lots of mud. Brett says mud just makes the course more interesting and a greater challenge for the athletes.

“Here in the U.S., people are just now catching on,” Brett says. “They’ve been doing cyclo-cross for a while, but Americans are discovering that cyclo-cross is a party with a bike race going through it. The Americans are putting their own spin on it and every year, we see the crowds growing larger and larger.”

While this is the 13th year for the Volkswagen Jingle Cross Cyclo-Cross Festival at the fairgrounds in Iowa City, this will by far be the largest field and the biggest audience. In many countries, the Cyclo-Cross World Cup is their Super Bowl.