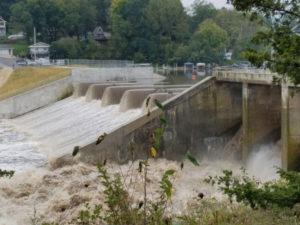 Residents of Lake Delhi are anxiously watching as there is major flooding upstream in Manchester.

The dam at the lake was breached by historic flooding in 2010 — draining the lake — and it was just refilled this summer. Lake Delhi District Trustees President Steve Leonard says they have partially opened three of the gates of the new spillway to deal with the high water flow.

The good news is that things at the dam site couldn’t be working better,” Leonard says. He says they were up early to get things prepared for the high water. Leonard says they also let people know that they would increase the output from the dam.

He says they let the people downstream know that there would be high water flow and says that is part of the normal emergency action plant. Leonard says they also let peopled know

upstream about the high levels there so they could get their boats out of the water and avoid problems with debris. Leonard says there is a lot of big trees and other debris flowing into the lake.

“While we have additional capacity for more flow to go through the gates and more capacity over the spillway — we certainly hope that none of us get additional water and that that would be needed,” according to Leonard. Lake Delhi’s dam was rebuilt with a mixture of state and local funds. It was officially reopened this summer.