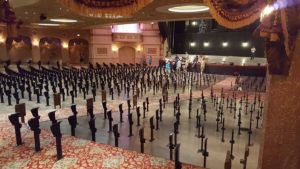 Volunteers took out the organ and seats in the Paramount Theatre in preparation for flooding.

Flood waters are receding in some locations of northeast Iowa while still rising in others.

Residents of Cedar Rapids are bracing for the Cedar River to reach a crest of 23 feet Tuesday morning.

“This will still be the second highest crest on record for Cedar Rapids, below 2008 of course, so it’s still a very serious flood for the area,” Skow said. In Cedar Rapids, residents and businesses in the projected flood zone were asked to evacuate by 8 p.m. Sunday.

Cedar Rapids Fire Chief Mark English is among the officials who pleaded with residents to evacuate if they’re in the suspected flood zone.

“In the flood of ’08 if you remember, this city had no fatalities as a whole community,” English said during a recent news conference, “so whatever efforts need to be taken or you’re advised to do, please do those.”

Schools in Cedar Rapids are closed through Wednesday. Officials in Cedar Rapids say a temporary flood protection system that’s being put in place is designed to withstand up to a 26-foot river crest. Governor Terry Branstad signed a proclamation Friday afternoon which activated the Iowa National Guard to help in the flood fight.

Iowa National Guard Adjutant General Timothy Orr says his organization “learned a lot” after deploying during the floods of 2008. 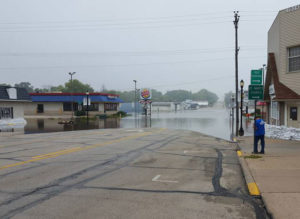 “I think it starts with the community preparedness and we’re seeing that all up and down the rivers, the pro-active approach of a lot of our communities,” Orr says. There’s damage to a lot of homes and property in Black Hawk County, where the Cedar River crested over the weekend.

Skow said the river topped-out at 98.9 feet in Cedar Falls and just under 23 feet in Waterloo. “Those were both the second highest crests on record,” Skow said. In neighboring Buchanan County, the Wapsipinicon River is now dropping after hitting nearly 19.4 feet in Independence.